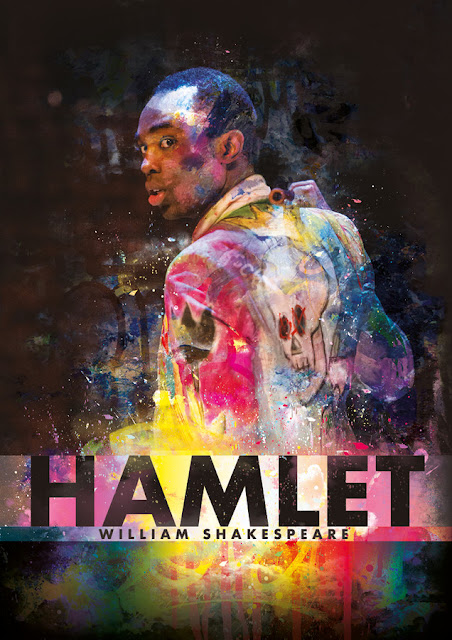 The Royal Shakespeare Company (RSC) will tour its acclaimed production of Hamlet, originally seen in Stratford-upon-Avon in 2016, to Salford, Plymouth, Hull, Newcastle upon Tyne and Northampton between January and March 2018, before transferring to London’s Hackney Empire between 6 and 31 March 2018.
“A landmark production” Financial Times
“Simply a terrific Hamlet, a blazing new star standing at the heart of an intelligent and engrossing production” The Sunday Times
Directed by Simon Godwin, the production will see RSC Associate Artist Paapa Essiedu reprise his award-winning performance in the title role as one of Shakespeare’s most famous tragic heroes. Further casting to be announced.
RSC Executive Director, Catherine Mallyon, said: “We are passionate about taking the productions we make in our home in Stratford-upon-Avon to theatres across the UK.  In 2018 we are glad that many people across the country will have the opportunity to see our work at their local theatre. As well as Hamlet, our acclaimed production of Matilda The Musical will also embark on its first UK and Ireland tour.  Look out for details of more 2018 touring later this summer.”
Paapa Essiedu won Best Performance in a Play at the UK Theatre Awards in 2016 for his role as Hamlet.  Paapa’s other RSC credits include Edmund in King Lear, Fenton in The Merry Wives of Windsor and The Mouse and his Child.  Additional theatre credits include King Lear (National Theatre) and Romeo and Juliet(Tobacco Factory).  He played Demetrius in Russell T Davies’ adaptation of A Midsummer Night’s Dream for BBC1 (2016).
See Paapa talking about the role: https://youtu.be/762waHrlqJM
Simon Godwin’s work as a director includes The Two Gentlemen of Verona(RSC), Richard II(Shakespeare’s Globe), Twelfth Night, Man and Superman, The Beaux’ Stratagem and Strange Interlude (National Theatre). He is Associate Director of the Royal Court Theatre, and was Associate Director at Northampton Royal & Derngate between 2001-04.
Simon Godwin said: “I’m delighted that Hamletwill be touring in 2018.  Paapa Essiedu is British with Ghanaian heritage. When Paapa and I talked about the production, I realised how radical it might be to see Denmark through the lens of a completely different culture, a culture that Paapa himself had experienced.  I began to imagine a Denmark re-conceived as a modern state influenced by the ritual, traditions and beauty of west Africa.  So, our setting is full of the colour, emotional intensity and passion associated with that part of the world.
“As Hamlet, Paapa is intelligent, youthful and charismatic, with a contemporary wit.  But Paapa’s portrayal is also mercurial with an element of danger.
“Part ghost story, part family tragedy, part dark comedy, Hamlet is an urgent and gripping thriller.  I can’t wait to see how audiences respond to it around the country.”
Watch a clip from the production in 2016: https://youtu.be/--tWffBTyqM
Hamlet is directed by Simon Godwin and designed by Paul Wills with lighting by Paul Anderson. Music for the production is composed by Jamiroquai percussionist Sola Akingbola. Sound is by Christopher Shutt. Movement by Mbulelo Ndabeni. Fights by Kev McCurdy.
Twitter: #RSCHamletTour
Tickets: