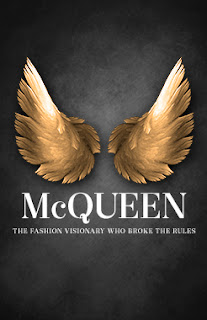 I have seen this play before; on it’s first run at St James Theatre. A very small and intimate venue. I was blown away.  Unfortunately, I could not get down to watch it again before the end of its run there, so when I heard it was having a second run at the Theatre Royal, Haymarket in London’s West End I had to get a ticket.

Theatre Royal is a much grander venue than that of St James.  It kind of fits the subject matter of Alexander McQueen, a fashion designer of a troubled mind. I was sat in the Royal Circle, not far from a mirror, which made me smile when the line about one of McQueen’s shows, “where everything was mirrored and the audience saw themselves,” was delivered.  Thankfully this was not to be repeated for the show.

Quite a few of the original cast have transferred with the play, namely Stephen Wight, who has a canny likeness to the subject matter. Again, if you get a ticket, get settled in your seat about ten minutes before scheduled timing, as Wight will be waiting for you.

To quote Tracy-Ann Oberman who plays Isabella Blow, McQueen The Play is “about genius and creativity but also mental health issues, it's about depression and how you live with that.”  I, for one, although have seen this play twice now, am still not clued up about the world of fashion but it is how exactly as she describes it and the way it gets delivered through the amazing script of playwright, James Phillips that grabs you.  Then we have the direction of John Caird and the phenomenal choreography of Christopher Marney.  With so much creativity on the stage you are unsure where you are looking once the play starts as Wight and the Dancing Mannequins are ‘staging ideas’ of McQueen’s next show.  Without the ensemble of dancing Mannequins you would wonder where the show would be? They have no words.  It’s their expression in body and face that draws you in. Sometimes I was more fascinated with the mannequins, I actually lost myself listening to the actors. And the twins – just watch those twins (Eloise Hymas and Amelia Jackman). The serious expressions and pointed toes are a wonder to watch.

The big difference of the transfer from a small intimate place to a small but grand theatre is that there is an added interval and some slight script changes. I cannot put my finger on the script changes but I am sure they were there. I think the former takes away the intensity to what I saw at St James but if visiting Haymarket is your first experience of McQueen this is not as important as you will definitely experience the excitement and awe that I did on my first visit. I am probably just being over critical of the emotions I felt that first time.

Carly Bawden delivers a great Dahlia too. Her accent is not far from the original casting of Dianna Agron who is American. I think the most powerful performance from her comes in the second act as we really get to see the whole relevance of her character. Did she really break into McQueen’s house or is she really just his subconscious of his not so sound mind?

The character of Arabella played by Laura Rees (or Victoria as she is labeled by Dahlia) is a welcome one as she is a journalist trying to break into the mind of what McQueen is portraying in his shows for the grit beyond the glamour.  It is a clever part of the play both visually and scripted as we are trying to get to see the seriousness of McQueen’s work through an outsider’s mind, which Rees delivers, or more so questions.

The strongest part in the play though comes with the meeting with Isabella Blow.  She has long since been dead as McQueen comes to visit her. The set is simple but the words are powerful and more so with Oberman and Wight in these characters.  At first you may think it a light-hearted scene as the character of Blow is introduced to us in a very flamboyant way but the conversation between two troubled souls really cuts you like a knife.

Again, the set, the music, the lights is the big added bonus to this production. Your eyes are opened to this amazing spectacle but the script leaves you with so many things to think about and leaves you wanting to ‘survive the night’ and wanting that bit more for your troubled soul.

A great transfer to the West End but I think if you were there at St James you may feel there was a little bit lost.  Unsure if it would be possible but maybe take away that interval for added intensity.

This review was written by Victoria Ling  for Jowheretogo PR (www.jowheretogo.com). Follow Victoria on twitter @LilVik or follow her photography on Facebook (www.facebook.com/137imaging)
Tickets:
Booking through to 7th November 2015.
See the website www.trh.co.uk for details
Posted by North East Theatre Guide at 22:38