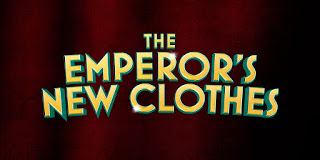 This December, Northern Stage and Kitchen Zoo are teaming up to make a brand-new adaptation of Hans Christian Andersen’s classic folktale, The Emperor’s New Clothes. The creative teams behind a string of successful Christmas productions including The Snow Queen, WOLF! and James and the Giant Peach will create a new festive show for audiences to experience at home from 12-31 December.

Adapted by Laura Lindow and directed by Mark Calvert, The Emperor’s New Clothes is devised by Bob Nicholson and Hannah Goudie-Hunter and designed by Alison Ashton, with choreography by Martin Hylton and original music by Jeremy Bradfield. The show will be filmed by award-winning North East filmmakers Meerkat Films, and performed by Bob Nicholson, Hannah Goudie-Hunter, Jeremy Bradfield and Simmie Kaur.

Director Mark Calvert said, “It's been an extraordinary year for all of us and to make something at the end of this extraordinary year is an absolute privilege. The team have been working hard over the last two months to create something that we hope will give our audiences some much needed Christmas cheer and end the year on some magic, and more importantly, some laughs.

“The Emperor's New Clothes has to be the biggest con ever pulled in the history of story-telling. Two inept chancers - think Laurel and Hardy or the wet bandits from the classic Christmas film Home Alone - manage to convince an Emperor to go out in their 'all together', exposing them in more ways than one. We feel it's a story so packed full of ridiculous moments, that to call it farce would be too tame.

“We wanted to tell this story in front of a live audience, and up until the new lockdown was announced that was always the plan. But this added obstacle has also brought other possibilities, and we're really excited about producing the first digital theatre offer for Northern Stage. We're going to be working with the excellent Meerkat Films to film a live theatre show with a touch of Enola Holmes and Chewing Gum thrown in.

“Finally, this is my very last Christmas show for Northern Stage so I want to thank everyone who has been to see our productions. It's been a total honour to tell you stories over the last five years, from The Wizard of Oz to James and the Giant Peach, from A Christmas Carol to last year’s Snow Queen - I hope over the years I've given you some end of year joy and some great family story telling.”

Kitchen Zoo create playful, energetic and joyful theatre for young audiences and have made two sell out Christmas shows for under 5s at Northern Stage, The Three Bears at Christmas (2018) and WOLF! (2019). Bob and Hannah from Kitchen Zoo said, “We’re over the moon to be joining festive forces with Mark Calvert and Laura Lindow this year to devise a fantastically fun family show. And we’re thrilled to be co-producing Northern Stage's first digital Christmas show.”

Simmie Kaur is returning to her native North East to make her professional debut after training at Drama Studio London. She said, "The first bit of theatre I ever saw was at Northern Stage, and now I have the honour to perform on that stage. I’m so excited to be back in my hometown doing what I love most!”

The Emperor’s New Clothes will be streamed online from Saturday 12 – Thursday 31 December. Tickets are £15 per household and go on general sale on Monday 16 November, with a 20% discount for bookings made by Monday 23 November.  Northern Stage supporters and members can book advance tickets for £10 from Monday 9 November.

Book online at www.northernstage.co.uk/Event/the-emperors-new-clothes or call the box office on 0191 230 5151.