A Christmas Story by Wayne Miller

For the past eleven years, Wayne Miller was the creator and star of the phenomenally popular children’s under 7’s pantomime ‘Santa’s Naughty Elf’ at The Customs House Theatre in South Shields. 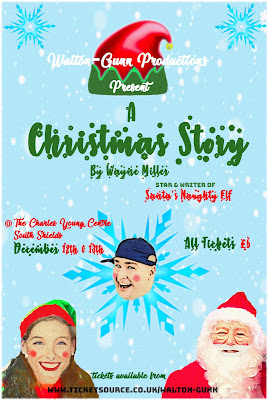 A show that featured some top North East talent and a show that entertained thousands each Christmas. More than fifty performances during the festive season, a successful sell out run for the South Shields theatre. Something that quickly became a family tradition for many North East audience members.

This Christmas, the creator of ‘Santa’s Naughty Elf’, ‘The Peter Plank Panto’s’ and ‘Wendy The Witch’ is bringing a brand new festive family fun pantomime, perfect for the under 7’s.

A Christmas Story - tells the wonderfully funny tale of how ‘Santa’s Elves’ first became the workshop elves in the North Pole, that we all know and love. It promises to be a mini panto that will be filled with Slapstick Silliness, Musical Mayhem and the most joyous Family Festive Fun.

The production went on sale just a week ago, selling two hundred tickets in 24 hours. A ticket rush that has led to the first two shows to be sold out within the first week on sale. The shows writer Wayne says “That first twenty four hours was incredible, tickets were just flying out. It was great to see how much the people of the North East love pantomime. It’s such a Christmas tradition for so many!”

With that amount of ticket sales in such a short space of time, the shows production company Walton-Gunn Productions knew extra shows would have to be considered, to keep up with demand. “With the ticket sales going the way they did, we had to discuss adding extra shows. We wanted to offer people something special this Christmas after a tough year. So, we wanted to make sure as many people as possible have the chance to enjoy it.” added producer Stacy Walton

A Christmas Story promises to be the show to see this festive season. Something to be enjoyed by all you big kids as well as your little ones.