REVIEW: The Book Of Newcastle 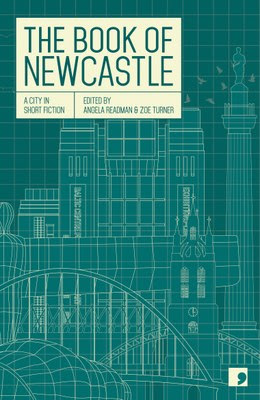 We are now entering the third week of lockdown and hence we are getting the opportunity to do much more reading. We were offered the chance to review this new release – a book full of short stories about Newcastle – by the publisher. It has been a source of some escapism. The 144 pages contain a number of vignettes about the city.

A collection of different voices, different situations but centred around a location we know well. Some tales are by born and bred Geordies, others by people who moved into the area and were taken in by its charm. Now like any collection, this is a mixed bag. Mixed in voices, styles, attitudes and colour. There are happy stories, thoughtful stories and some which are much more poignant. There are some really strong stories in this anthology which made it worth reading.

The book makes a really strong start with Calling from Newcastle.  From the pen of the much missed Julia Darling. Whilst traditional industry has disappeared, new technologies have taken their place. Thus, for many, their first job will be in a call centre rather than down a coal mine or in a steel works. The opening story captures both the issues of starting your first job, along with that necessary adjustment, and the nature of speaking to strangers on the phone all day. The tale is quickly developed and, like any good short story, leaves you wanting more.

Magpies by co-editor Angela Readman is rich with local identity. If you know this region then you'll be able to picture the scenes well.

Another set of familiar surroundings are found in Tabs by Sean O'Brien. A library full of regulars keeping warm and examining the images in Practical Photography magazine between filling in job applications. I don't recall smoking in libraries myself - they always seem to be one place that smelt of something different (books) but I do remember the fog when entering pubs like the Crown Posada and the Barking Dog. As the story points out, these city centre bars have their regulars - their characters - with their own relationships.

J. A. Mensah’s Thunder Thursday on Pemberton Grove ties up life in a Newcastle street with a significant real life chapter in Newcastle’s recent past. The close proximity of interconnecting lives in the Tyneside flats is examined. The noise DIY in one flat causes issues in others. Do we know our neighbours. Will we support our neighbours if an issue occurs? Of course,  if you were in Newcastle in June 2012 then you know what is about to happen.

Living on Planet Clacky by Glynis Reed is a a brief tale of sisters, popularity and coping with parents splitting up.

Margaret Wilkinson is better known for scriptwriting and with The Here and Now she adopt a unique voice as the story refers to “you” throughout. A shop keeper in his 30s with a health condition pondering on his future.  Should one have that operation? The story refers to the historic yet run down nature of aspects of Westgate Road. Once prestigious and now a shadow of its former self. As a former resident of Westgate Road this was one story that resonated with me.

Blood Brothers by Jessica Andrews is another that hit a chord. Two girls grow up together and one heads off to university. Nothing unusual there perhaps but by wrapping this tale around familiar Newcastle haunts, with the pair doing the recognisable things that you did as you grew up sets it apart. Indeed, I recognized the feeling of when you return from university and the place and people that you left behind haven't stood still waiting for you.

Duck Race by Crista Ermiya nods in the direction of Newcastle's blossoming cultural scene.  Three poets meet up as the Newcastle based poet welcomes back her ex and his pregnant wife. The mix of venues like the Cluny, and its’ fund raising duck race, along with the city's role in the rise of Jimi Hendrix make this story into much more. The author paints a strong picture of the area in which the story takes place. This is a narrative that could be easily made into a short film.

The late Chrissie Blazebrook was a comic novelist and in Loftboy some thought has been put into setting the scene. Heather Boot lives with her son Billy in a housing association property. The house is over a hundred years old but, when an inspector from the association  comes around,  Billy discovers that the loft space is communal. No walls separate each house up there. In other words, Billy could explore it when his mam was out. The neighbours described by Chrissie Blazebrook reflect how Elswick's population has changed since the second world war. The author captures the excitement of 'going up there'. This is something I recognize from my own childhood.

The final story, Ekow in Town Moor, is poet Degna Stone's first published short story. It is a deeply reflective tale looking at the loss of a parent whilst exploring the Town Moor. I remember being amazed at the huge expanse of green moor in the centre of Newcastle when I first arrived in the city. Degna's short tale manages to encapsulate both the   process of grieving with this unique space.

One major advantage of a set of short stories is that it is easy to pick up, read up a complete tale and then do something else. It has fitted in well around the life of a family in the current lockdown.

The book is available direct from the publisher and online from our affiliates Waterstones https://tinyurl.com/WaterstonesBookOfNewcastle and Amazon. #Ad