Preview: Jack and the Beanstalk at Darlington Hippodrome 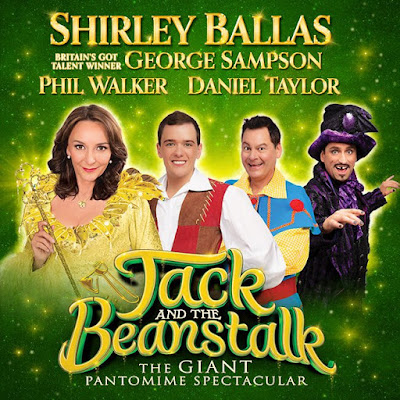 Starring in the title role of Jack Trot will be Britain’s Got Talent winner, George Sampson. The Warrington-born dancer, presenter, singer and actor rose to fame when he entered the second series of ITV’s flagship talent show Britain’s Got Talent where he wowed audiences with his impressive street dance abilities and performance skills, which he showcased in front of His Royal Highness the Prince of Wales and The Duchess of Cornwall at the Royal Variety Performance. Since then George has gone on to headline at regular summer festivals across the UK, host weekend specials at UK resorts, host various product launches, released his debut single ‘Get Up on the Dance Floor’, and released his debut dance DVD, Access 2 All Areas.

He continues to dance, but is now also known for his acting, having starred in the hip-hop musical Into the Hoodz in London’s West End and in the feature films Streetdance 2 and Streetdance 3D, held roles in Waterloo Road and Casualty for the BBC, starred in Mount Pleasant on Sky One, appeared in The Dumping Ground for CBBC and made his soap debut as Ryan in Emmerdale for ITV. Last year he starred in the Madness musical Our House and made his pantomime debut for producers Qdos Entertainment at the Crewe Lyceum.

Starring as Jack’s hapless brother Simon will be comedian Phil Walker. Having started his career as a Butlins redcoat, Phil went on to forge a successful career as a stand-up comedian, appearing regularly across the northern club scene and winning accolades including the City Life Comedian of the Year. Since then he has headlined at comedy clubs across the UK, entertaining thousands of people every year. He has also starred at the Edinburgh Fringe, winning rave reviews for his show ‘Is this it?’ and has entertained over 4,000 troops on two tours of Afghanistan, The Falkland Islands, Bosnia and Germany. A regular in pantomime, Phil spent 11 years starring at the King George’s Hall in Blackburn, and the last four years at Preston’s Guildhall. Jack and the Beanstalk marks his Darlington Hippodrome debut.

Joining them as the evil villain Fleshcreep will be actor and comedy writer Daniel Taylor. On stage he is best known for his portrayal of Sammy in Blood Brothers, Mickey in Down the Dock Road at the Royal Court, Tommy Cooper in the critically acclaimed The Tommy Cooper Show and as John Lennon in the off-Broadway production, Lennon - Through a Glass Onion at the famous Epstein Theatre in his native Liverpool.

Jack and the Beanstalk will be produced by Qdos Entertainment, the world’s biggest pantomime producer, and the team behind Darlington’s annual pantomime, who guarantee another must-see production packed with audience participation, sensational music and even more spectacular dance routines, jaw-dropping special effects and fantastic festive entertainment suitable for all ages.

Jake Hine, Executive Producer for Qdos Entertainment, said: “I’m thrilled that George, Phil and Daniel will be joining the wonderful Shirley in Darlington’s pantomime this year. Between the four of them we have every facet of dance imaginable, hilarious comedy and the ultimate panto villain. Together they will ensure Darlington can be sure of one of the best pantomimes yet, with plenty of exciting things planned.”

Darlington Hippodrome Director Lynda Winstanley said: “We are absolutely thrilled to announce that George, Phil and Daniel will be coming to Darlington Hippodrome to join Shirley Ballas. I’m sure Darlington audiences will be as excited as we are to see this fantastic cast in action ensuring Jack and the Beanstalk is another festive, family pantomime success.”

Tickets:
Jack and the Beanstalk runs at Darlington Hippodrome from Friday 6 December 2019 to Sunday 5 January 2020. For full details and to book visit www.darlingtonhippodrome.co.uk or call 01325 405405.
Posted by North East Theatre Guide at 11:27