As the clock strikes 12 (noon) the Sunderland Empire are delighted to announce that I’m a Celebrity and Gogglebox star, Scarlett Moffatt will be setting up camp in Sunderland this festive season. The Queen of Banter will be stepping into the magical role of Fairy Godmother when the enchanting tale of Cinderella arrives at Sunderland Empire, 13 December 2019 – 5 January 2020. 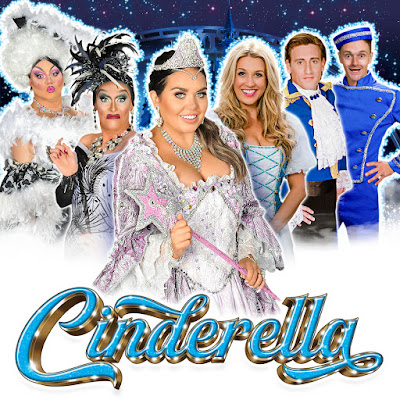 Joining Scarlett will be the undisputed Queen of North East comedy Miss Rory (aka Dan Cunningham) as the feisty Rorina Hardup (we’ll make sure she minds her Ps and Qs), alongside Duncan Burt as her equally ugly sister Ruby! Also starring are Nick Jnr’s Gemma Naylor (Go! Go! Go!) as Cinderella, ITV’s Superstars finalist Jon Moses as the Prince and the hilarious Tom Whalley returns as Buttons.

So, tick tock the countdown to pantomime season has officially begun as UK Productions, the producers behind last year’s swashbuckling pantomime, Peter Pan gets set to make a spectacular return with the Fairy Godmother of all pantomimes!

As producer Martin Dodd, of  UK Productions explains “I am not only absolutely delighted to be bringing such a fabulous line up of stars to this year’s pantomime, but also that many of them are home grown in the North East. They may work nationally and internationally, but there is only one place that they want to be for Christmas and that’s at home in the beautiful Sunderland Empire.”

Scarlett Moffatt has become a regular on our screens since making the public laugh with her quick-witted humour on Gogglebox, before capturing our hearts on I’m a Celebrity Get Me Out Of Here, which saw her crowned Queen of the Jungle in 2016. Scarlett is currently the host for I’m A Celebrity: Extra Camp on ITV2 and the new Team Captain on CelebAbility also on ITV2. She is currently filming a brand new show for Channel 4 which will air this Autumn.

Her warm and bubbly personality has led Scarlett to land a number of presenting roles, including her first live role alongside Dermot O’Leary interviewing award winners backstage at the NTAs, her dream-come-true gig hosting with Ant and Dec live on Saturday Night Takeaway and as host on dating show, Streetmate.

Away from the camera, Scarlett released her debut book ‘Scarlett Says’ in 2016, which was met with great acclaim, topping the Sunday Times Number 1 Bestsellers list. Her second book, ‘Me Life Story, Sofa So Good’, was released last year and takes a look at the starlet’s life, from her time as a student to her ever-developing career in front of the lens.

Miss Rory (the comic creation of North East born Dan Cunningham) has appeared at Newcastle cabaret hotspot ‘Boulevard’ as host since 2010, carving a place in the affections of audiences who visit from far and wide. Becoming a household name in the region and beyond, synonymous with glamour, wit and the edge only a lady like Rory can bring! Billed as ‘A Tyneside Institution’ Rory’s razor sharp wit and cutting asides along with hilarious observational comedy have led to numerous sell-out solo shows.

The North East casting theme continues with Tom Whalley, returning to Sunderland Empire after his hilarious comical debut as PC Pong in Aladdin in 2015 and ITV’s Superstars finalist Jon Moses returns home for the festive season. Born and bred in Sunderland, Jon Moses, has performed for millions of viewers on Andrew Lloyd –Webbers ITV’s Superstar search for his leading man, working with Mel C, Amanda Holden, Jason Donovan and Dawn French. His dynamic and powerful voice has taken him onto various leading roles in several national theatre tours. Jon’s recent album ‘Journey’ peaked at a whopping number 5 in the charts!!! Securing him a sell-out solo theatre tour all over the UK and Europe.
So get set to experience the classic tale of Cinderella and join Cinders on a magical adventure as she transforms from rags to riches, outwits her very ugly sisters, plus with the help of her best friend Buttons, a magical Fairy Godmother and a glittering glass slipper, wins the heart of the dashing Prince.

Don’t be late to the ball! Cinderella will feature all of the ingredients of the perfect pantomime with sparkling sets and lavish costumes, amazing song and dance numbers, romance, laughter and bags of audience participation.

Book your tickets and get ready to experience the thrill and enchantment of a spectacular panto at Sunderland Empire. #SundEmpirePanto

Booking Information:
Tickets on sale now and available in person at the Box Office on High Street West and online from our affiliates ATG Tickets: https://prf.hn/l/78zDAX6 #Ad
*Calls cost 7p per minute plus your standard network charge. Booking fees may apply to telephone and online bookings