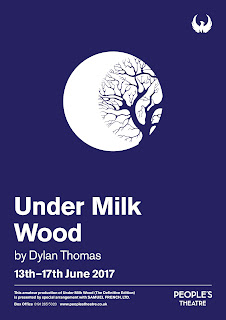 Under Milk Wood
by Dylan Thomas
NewcastlePeople’s Theatre
Tuesday 13th to Saturday 17th June 2017
"To begin at the beginning…"
An opening line which all lovers of theatre can quote.
It is 1954. A group of actors assemble in a BBC radio theatre to make a recording of Under Milk Wood - Dylan Thomas’s bawdy, touching tale of a day in the life of a mythical Welsh village.
The thoughts, dreams and desires of Llareggub's extraordinary inhabitants burst into life through the voices of the actors.
Thomas's acute eye and ear combine with his rhythmic and glorious poetry to seduce and absorb the audience into this unforgettable community.
Accompanied by the original musical setting of Daniel Jones, along with more recent additions played live on stage, our production of Under Milk Wood is performed as originally intended.
World famous as a writer, Thomas was also an avid performer in his youth, cutting his dramatic teeth on the stage of Swansea Little Theatre. Now regarded as crucial to his artistic development, his early days as an amateur actor helped to shape his unique ear for dialogue and idiosyncratic eye for character.
If you think you know Wales, think again. The land of Thomas’s fathers is celebrated and satirised through a lens of barbed irreverence, a whimsical fever dream featuring a parade of oddball locals brought to life by our cast of eleven who play multiple roles.
Under Milk Wood opens on Tuesday 13 June and is one not to be missed!

Also this month we are delighted to announce our new partnership with Ouseburn-based gallery The Biscuit Factory that will see us support one another and members of the local arts scene in Newcastle. The first exhibition under the new relationship will be New Perspectives in the gallery in our new foyer from Tuesday 13 June – Saturday 29 July.
Tickets:
Tickets cost £13.50 (Concessions £11) and are available for the box office on 0191 265 5020 or via the website www.peoplestheatre.co.uk
Posted by North East Theatre Guide at 20:37