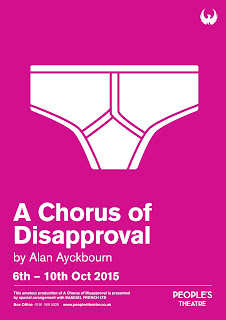 A Chorus Of Disapproval
Newcastle People’s Theatre
Tuesday 6th to Saturday 10th October 2015
Newcastle’s People’s Theatre are excited to start our new Season next week, kicking off with Alan Ayckbourn’s hilarious comedy A Chorus Of Disapproval.
Shy widower Guy Jones (Colin Jeffrey) joins his local operatic society during their rehearsals for The Beggar’s Opera.
But for nice guy Guy who just can’t say no, the onstage dramas and off stage shenanigans are soon proving difficult to untangle.
A Chorus Of Disapproval offers a fun-filled glimpse into the rehearsal rooms of PALOS (the Pendon Amateur Light Operatic Society). And if there’s something we know a little bit about, it’s amateur dramatics!
We’re not suggesting, of course, that members of the People’s Theatre go on like this lot with their illicit backstage affairs, a cuckolded director, prima donnas and a grumpy backstage team!
Prolific playwright Alan Ayckbourn recently directed his 79th play Hero’s Welcome at Scarborough’s Stephen Joseph Theatre.
In A Chorus Of Disapproval, which premiered in Scarborough in 1984 and subsequently transferred to the National Theatre, he ingeniously mirrors Gay’s story of the dashing highwayman Macheath with the amateur thespians and their own romantic entanglements.
Director Chris Heckels comments “The PALOS players really do get themselves into a mess with their intrigues, back-biting, back-stabbing and sometimes full on aggression! But they have real emotion and enthusiasm too – director Dafydd and his company truly care about theatre and believe in its importance, which is something that we at the People’s can certainly relate to”.
The People’s Theatre can’t wait to welcome audiences back after our summer break with this smart, funny, fast-paced comedy of theatrical mishaps and misunderstandings.
Tickets:
A Chorus Of Disapproval comes to The People’s Theatre from Tuesday 6th to Saturday 10th October 2015 at 7.30pm
Tickets: £13.50 (Concessions £11)
Box Ofiice: 0191 265 5020
Website: www.peoplestheatre.co.uk
Posted by North East Theatre Guide at 18:17