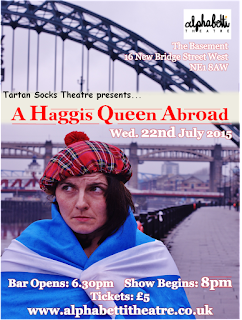 Tartan Socks Theatre wrestle this great and worthy question in their Edinburgh Fringe debut, A Haggis Queen Abroad.  Smugly enjoying being the only Scot on the block, the Haggis Queen finds herself suddenly adrift when the Scottish Independence Referendum hits and she must decide on which side of the fence her loyalties lie.  With a toe in the ‘Yes’ camp and a heel in the ‘No’, the Highland-dancing-Haggis-Queen debates her right to even have a say in the fate of the country she loved but left.
Through mischievous musings over the myths of Scottishness; the jokes, the flaws, and the downright untruths, the Haggis Queen takes us through her inevitable identity crisis as she tries to understand who she is, and where she really belongs.
Eilidh Talman is a Scottish-born actress and theatre-maker based in the North East of England.  She has recently enjoyed collaborations with Twenty Seven Productions, Theatre Space North East, and Eighties Doubt Films, as well as performing at Northern Stage and the Live Theatre.   ‘A Haggis Queen Abroad’ marks her first solo appearance at the Edinburgh Fringe.
“...hugely generous... The night was lit up by Eilidh Talman...”     Andrew Latimer, Arts blogger
Tickets:
NewcastlePreview: 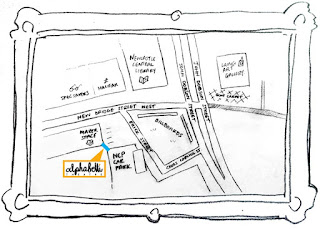