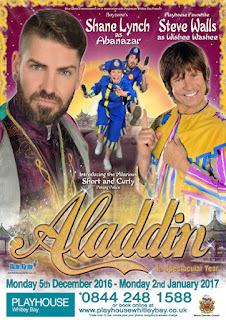 Blue Genie Entertainment and the Playhouse Whitley Bayare pleased to announce that this year they will be supporting the North Tyneside based charity Out of Sight.
Blue Genie Entertainment Managing Director Gary Telfer said: “It was a really hard decision this year; we literally had hundreds of charities come forward, all of them worthy of our support. However, Out of Sight really stood out to us as a local charity that we could support and make a difference.”
Out of Sight are an award-winning, parent-led, 'not for profit' charity who support visually impaired children and their families living in North Tyneside. Many of the children have complex health needs in addition to their visual impairment; some of them have life-limiting illness.
Last year, Blue Genie Entertainment and the PLAYHOUSE raised over £3000 for The Ellen Timney Foundation and this year they are aiming to raise even more for Out of Sight.
There will be 51 action-packed performances of ‘Aladdin’ at the PLAYHOUSE, featuring a host of top quality professional performers. Joining Boyzone’s Shane Lynch as Abanazar, PLAYHOUSE favourite Steve Walls (back by popular demand for his 7th year) playing Wishee Washee, and the returning Charlotte Chinn as Princess Jasmine, will be Sam Ebenezer as Aladdin, comedy duo Short & Curly (Rebecca Shorrocks and Paul F Taylor) as the Peking Police (fresh from a stint and the Edinburgh Fringe), Grant Flanagan as Widow Twankey, and local actress Georgia Nicholson as the Genie!
Tickets:
Tickets for Aladdin costing £23 - £19, £21 - £17 conc., Family Special £14 per person, Groups £17/£16, Youth Groups £16/£15 are available now.
Tickets are available from the Box Office open Monday – Friday 10am – 4pm, Saturday 10.30am – 2.30pm plus until show start on event days. Tickets can also be purchased on the booking hotline 0844 248 1588* or online at www.playhousewhitleybay.co.uk.