An actress who has starred alongside some of Hollywood’s biggest names will be centre stage as two plays by one of Britain’s best-loved play-writes are performed for the first time in Durham. 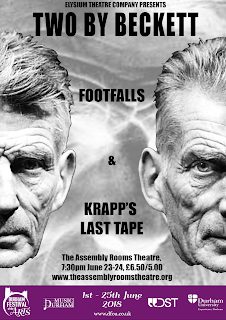 Felicity Dean appeared alongside Michael Caine and Al Pacino in ‘1776’ and ‘The Whistleblower’ respectively, and has appeared on the silver screen alongside other big names including Oliver Reed, Judi Dench, Billy Connolly and Charlton Heston. Felicity, who is currently starring in ‘Queen Elizabeth I’ on Channel 5, will star as the lead role in ‘Footfalls’ by Samuel Beckett, which will be performed as part of a double-bill with another Beckett play, ‘Krapp’s Last Tape’.

They will take to the stage to perform ‘Two By Beckett’ on June 23 and 24 at Assembly Rooms Theatre in Durham as part of the Durham Festival Of Arts.

Felicity said: “I have always loved the theatre. It is very different to film where everything is done in advance. In the theatre you can straight away gauge the audience’s reaction and if you are on the right track. It can terrify me as well, which is a good thing. I think you should do at least one thing a year that terrifies you – where there is fear there is growth and you learn through experiences like that that.”

“There are a lot of fantastic actors I have had the pleasure of working with, including Michael Caine and Al Pacino, who remains a good friend. I have had my education in acting through artists and actors. I have worked with wonderful people.”

She added: “I am so looking forward to bringing this play to Durham for the festival. When Beckett is done usually it is in London. This is giving access to a whole swathe of people who otherwise would not be able to enjoy the masterpieces he wrote.”

Nobel Prize Winner Beckett is best-known for writing the influential ‘Waiting For Godot’ in 1953. ‘Krapp’s Last Tape’ and ‘Footfalls’ feature an all-male and all-female cast respectively.

The productions have been put together by Elysium Theatre Company, which is Durham’s only independent professional theatre company.  Formed in 2017 by director and actor team Jake Murray and Danny Solomon, its aim is to bring the best of world theatre to the North.

Jake, who runs the company from the Assembly Rooms and is directing the Beckett double-bill, said: “Samuel Beckett is one of the greatest play-writes of all time and it is a privilege to be putting on two of his play back-to-back for the first time ever in Durham.  I played the Boy in a famous production of ‘Waiting For Godot’at the Royal Exchange, Manchester and the Roundhouse, London, years ago, and I’ve been a Beckett fan since then.”

“The first play I ever directed was Beckett’s ‘Endgame’ when I was 17, so it’s wonderful to be doing these plays in Durham now. He really is an incredible writer with so much to offer audiences of all ages. Our aim as a theatre company is to put on the highest quality of productions right here in the North, and these plays are great examples of that.”

His thoughts were echoed by Edmund Dehn, who follows in the footsteps of great names including John Hurt and Harold Pinter in playing Krapp in the one-man-show.  Edmund, who appeared in the internet sensation short film ‘Judge Minty’ as well as the cult children’s show ‘Knightmare’, said: “ This is the first time I have done Beckett so I am very excited. When they write the history of 20th century play-writes I am sure he will be number one. It is an honour to follow in the footsteps of some great names in playing Krapp in what is an iconic play. “

“In one respect it is fantastic to be in a one-man show because you get all the limelight on you, but it is more nerve-racking as if you go blank there are no other actors to help you out! But that’s part of the job and I am really looking forward to the challenge. It is a privilege to be part of this fantastic production and I can’t wait to perform in Durham.”

Tickets:
To buy tickets for the double-bill, head to www.theassemblyroomstheatre.org.
For more information on Elysium and their productions, find them on social media at @ElysiumTC.
Posted by North East Theatre Guide at 21:31