Finally, the theatres reopened and we all got a chance to share the experience of a drama with other people in the same room. This is a tense crime thriller which holds off the plot twists for the final couple of scenes. Peter James is a successful author and it is clear to see why.

So what is a visit to the Theatre Royal like at the minute? There is a socially distanced queue to stop a crowd building up at the doors. We were quickly processed by showing the QR code on the e-ticket to the staff before being let in. Inside there are plenty of hand sanitiser stations and everyone was wearing masks as a condition of entry. The theatre is now cashless so everything is being paid for using your contactless card. The big change is that you are expected to take your drink or ice cream to your seats rather than congregate in the bar.

Another big plus point was that the air conditioning in the circle was working well so it was cooler in the auditorium than it was outside. Unlike some venues, cinemas in particular, I didn’t feel a need to stick a coat on. 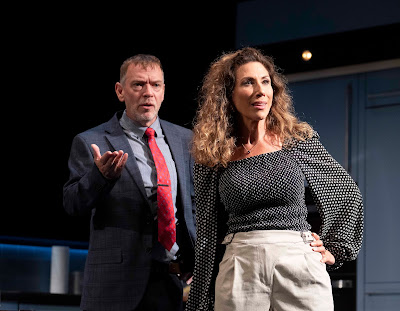 Onto the play: the bulk of the action takes place in the Brighton home of the Bryce family. Designer Michael Holt has put a second raised space behind the house and that is where the action begins as escort Janie (Natalie Boakye) awaits the arrival of her client Mick (Mylo McDonald). Quickly the action moves to the house. Gaynor Faye, who has appeared on television in Emmerdale, Coronation Street and The Syndicate appears as Kellie Bryce, and she is cleaning the place around her 17 year old son Max (Luke Ward-Wilkinson). Adam Woodyatt takes a break from Eastenders to appear as the husband Tom. He is struggling to keep his business going and it is quickly revealed that the family are spending more than they can earn. 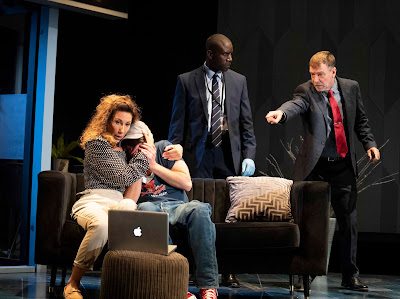 Tom has picked up a USB stick that was left behind on his commuter train and he plans to do a good thing by looking at it in order to work out who to return it to.  Unfortunately, this apparent good turn quickly turns into a police matter as he finds himself exposed to the work of a criminal gang. 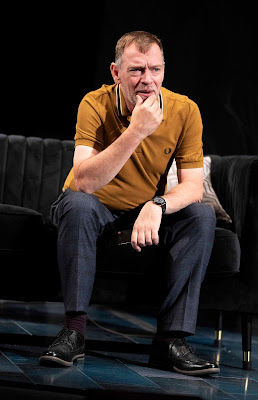 The local CID is led by Roy Grace (Harry Long), who has wisecracking Glenn Branson (Leon Stewart) and Bella Moy (Gemma Stroyan) to bounce ideas off and to help with the investigation. They operate from a police station set that, at times on opening night, struggled to be wheeled on and off the stage.

The story tries to be up to date featuring mobile phones, laptops and internet security as part of the tale. However, in doing so, the adaptation starts to drown in exposition as the action stops as the actors explain to the audience the workings of tracking cookies and bitcoin transactions. Thus it was a challenge for IT savvy son Max to be both a stroppy teenager, who is reacting to his family in crisis, and to be the one explaining why he is able to break the encryption on the memory stick or hacking into his mother’s phone.

Light relief, fortunately, came from some of the bad jokes shared by the police. To be honest, it was wonderful seeing and hearing an audience react even if the jokes are on a bad “Dad joke” level.

Director Jonathan O’Boyle has managed to keep the show evenly paced. The action runs for just under two hours, plus the interval. The split stage helped to keep the action flowing and I did prefer to see the other location on stage rather than through a video screen. Adam Woodyatt and Gaynor Faye work well as the central on stage couple. Mylo McDonald gave a natural performance that made the most of his time on stage. 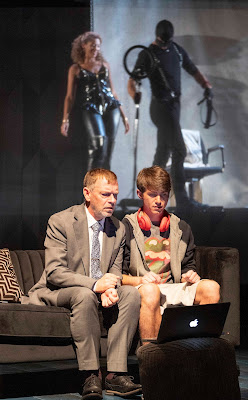 Perhaps I am getting better at guessing, but I had predicted some of the elements of the final Scooby-Doo reveal.  However the one thing I didn’t understand was why they kept the back door open when the house was clearly being targeted by the gang.

Whilst it was fantastic to be in a venue, sharing the experience of live theatre, I did find myself noticing the footsteps off stage and jangling of chains from time to time distracting. Judging by comments around me, I wasn’t the only one.

In reviews I aim to do nothing more than say if I enjoyed the show. Regular readers will know that I don’t aim to say any more than that. Looking Good Dead is an interesting idea that will please the fans of the genre but our group, who love a good mystery, gave a collective shrug of the shoulders as we left the theatre.

Tickets are priced from £15.00 and can be purchased at www.theatreroyal.co.uk or from the Theatre Royal Box Office on 08448 11 21 21 (calls cost 7ppm plus your phone company’s access charge).