This is Who We are, We will Survive. Navigating COVID-19 as an Arts Venue 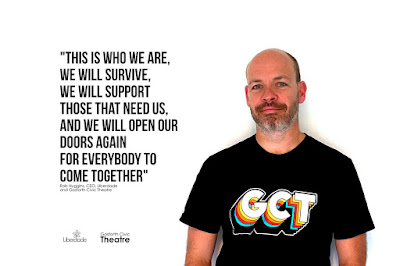 He  said "For those of you that don’t know us, Liberdade is a disability arts organisation, we began in 2003 as an apprenticeship scheme with the aim of enabling 8 young people with learning disabilities to set up and run their own physical theatre company. Those 8 original company members and now many more show how running an organisation can offer people with learning disabilities choice, and the opportunity to shape the world in which they live.


We opened Gosforth Civic Theatre less than four years ago, last year we hosted more than 900 events and activities and invited over 50,000 people through our doors. in the words of Ozzy one of our founding members, we opened the theatre because; “Historically society has created places for people with learning disabilities to go, at Gosforth Civic Theatre, people with learning disabilities are creating a place where everyone can come together.”


Like all arts organisations we want to change the world, we want to bring people together to create understanding, we want to decide what is the new normal by being extraordinary, and we want to shape our community by telling our stories and providing a home for everyone to enjoy.

Like many, if not all of us, we didn’t see it coming, when I think back it feels like one day we were working hard as usual delivering our arts and community programmes and the next we were chaining the doors shut and walking away… Today we should have been hosting Curious Monkey for the last stop on their national tour of ‘Here’, instead we have heard a monologue from the play and I have been dropping mobile internet routers and iPads off to our members to insure they can access remote workshops.

Initially I thought it was all over, I had made a commitment to the staff to pay them in full for as long as I could, we paid artists for work that we had commissioned and we made a film with our company members to help have the impossible conversation about why we had to close.

We like most venues rely on our earned income, it makes up nearly 70% of our running costs and over night we had lost all of it, we are not an NPO, and we had no cash reserves, although we did have a lot of beer and crisps that we were unable to sell, so it wasn’t all bad news.

Disproportionately to a lot of you here we were substantially helped when the job retention scheme and hospitality grant were announced by the government. It still felt, however, that the government were out to get us, the wording that was being used to protect the age old establishment at the expense of the cultural infrastructure of the country was and continues to be shocking, but above all motivating. My mantra to anybody became; ‘This is who we are, we will survive, we will support those that need us, and we will open our doors again for everybody to come together’.

With such little capacity because of the furlough scheme and lengthy extended improvisations with my 3 year old…I was constantly asking myself, what should I do first? who should we support? And when will all of this end? These were impossible questions but rightly or wrongly we prioritised supporting our company members and securing the future of the organisation first. It feels now that we can begin to think about our future programme and how we can all work together with other artists, organisations, communities and audiences to make a new start and it is an honour to be here, together with all of you now.

You can support Gosforth Civic Theatre and Liberdade by donating to our Covid-19 Appeal here https://bit.ly/GCTCovidSupport.