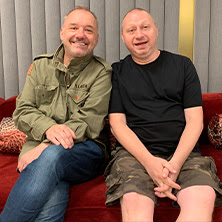 For the first time since 2017, Athletico Mince will be brought to life on stage. Hosted by comedian Bob Mortimer and writer Andy Dawson, the podcast first began as a humorous discussion on the world of football but quickly evolved to hilarious conversations around Bob and Andy’s bizarre experiences and encounters.
Bob and Andy’s comedic take on the world around them, as well as the regular segments from a number of real and fictional characters, invites millions of listeners and over 200,000 listeners per episode.
Athletico Mince will see Bob Mortimer return to the Tyne Theatre & Opera House following, An Evening with Vic and Bob, which sold out within a few hours of going on sale.
Experience Bob and Andy’s supreme stage presence and expect to hear from your favourite characters.
Theatre Director Joanne Johnson said “We are delighted to welcome Athletico Mince onto our stage this year. There is a lot of excitement and anticipation as the podcast hasn’t been on stage since 2017. We’re certain that ticket-holders will love every minute of Bob and Andy’s hilarious dialogue.”
(Please note the show is not an episode recording)
NB: Show content 14+